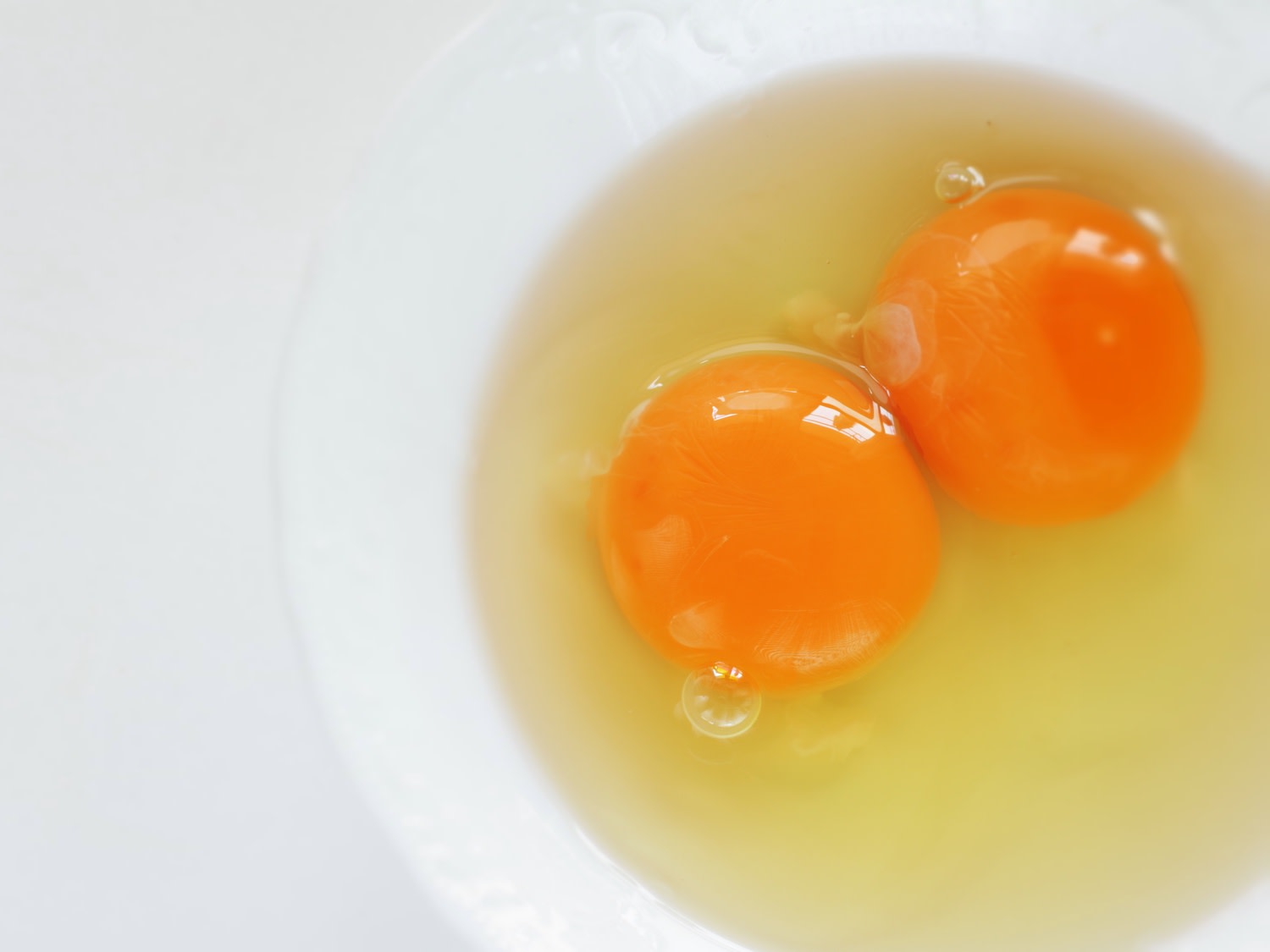 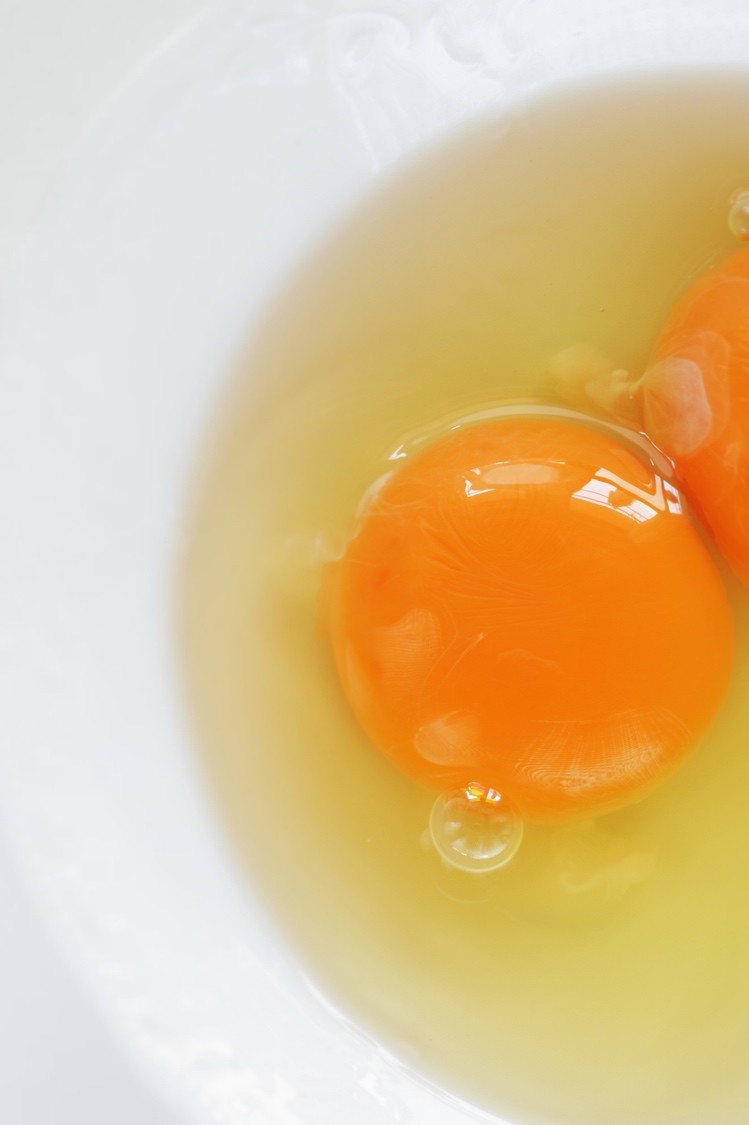 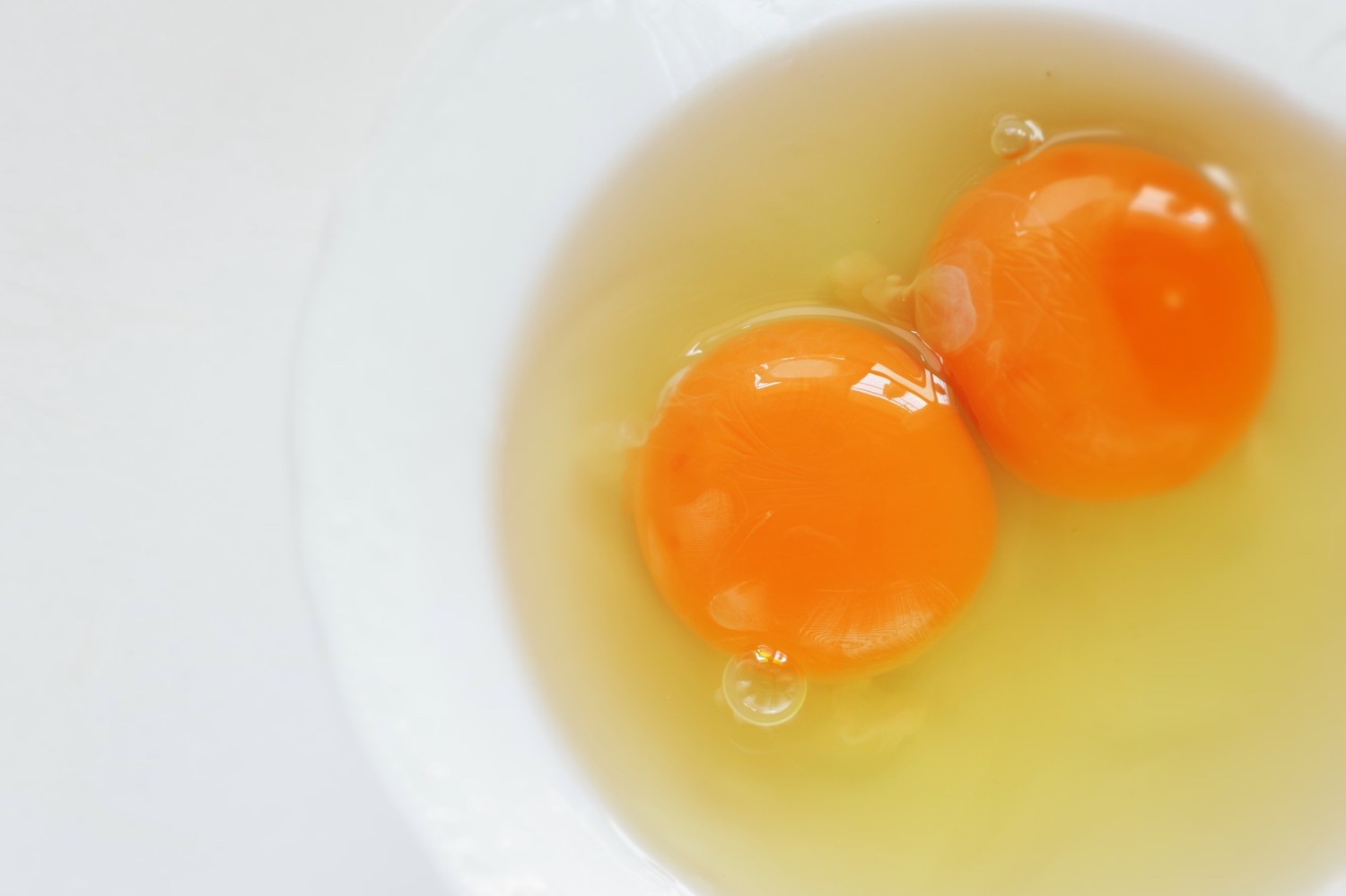 Have you ever cracked into an egg with a double yolk? Lucky you! Ever cracked into several eggs in your dozen to find double yolks in more than one egg? It might seem like finding a four leaf clover, but there is actually a reason this happens fairly often.

By themselves, double yolks are fairly rare – you might find them in 1 of every 1,000 eggs. These eggs typically come from our younger hens who are still learning how to lay eggs.

As you might expect, double yolked egg shells tend to be pretty big. In fact, they are usually graded ‘Super Jumbo.’ Eggs identified as Super Jumbo are too large for our packing machine to pack into cartons, so they are moved to the hand packing station. At Nellie’s, these eggs are still labeled as Jumbos, even though they are technically Super Jumbos. As the hand packers fill their Jumbo egg cartons with Super Jumbos, more than 50% of those will include an extra yolk. So that makes something fairly rare in nature suddenly appear rather common, simply because they have all been grouped together during the packing process and put into the same cartons.

So if you crack open a Nellie’s egg and find a double yolk, you’ll actually be pretty likely to find another ‘eggstra’ yolk or two in your dozen. And because those cartons are hand-packed and placed in cases together, you could find a whole grocery display of Jumbo dozens that have a high likelihood of containing a double yolked egg or two!

I get eggs fro a farm in Duncan BC. I am on my second dozen of eggs that are all double yolkers. Does this mean that they are higher in cholesterol?

Hi Dick, that is correct. Since there are two yolks in the egg, the egg will likely contain higher nutritional properties than an egg with a single yolk. However, it's difficult to tell exactly what those values will be, given that each egg and yolk is unique. If you have any concerns about your cholesterol intake we recommend consulting with your doctor.

I just made scambled eggs and cracked 4 eggs.All 4 were double yoke. I think the rest of them are too. It was funny when I purchased the eggs extra large I thought the package felt very heavy. I hope the superstition brings me good luck nothing else. Lol

That's awesome, Alie! We sure hope so too.

I received an entire cartoon of double yolk eggs. Just purchased another batch and after several normal eggs found a double yolk. I think before this, I've only seen 1 double yolk in my entire life.

Wow! Sounds like you sure hit the jackpot, Maria. Might these have been our Jumbo size eggs?

Those are incredibly rare, Virginia! It sounds like you were having a seriously lucky day (or working up some eggcellent magic). Congratulations on your unique find!

Just had one of your dozens in which 8 of the eggs were double yolkers!

Wow! Sounds like you had a lucky batch, Niko!

Since there are two yolks, would that affect a recipe that calls for a certain amount of egg whites?

Hi Alexandra, great question! With most recipes you should be fine, as the bigger yolk tends to balance out the overall larger size of the egg. However, if you have a scale you can always measure by weight: 1 egg white = 30g or 1 oz. We hope this helps!

I cracked a double yolk on Tuesday, but I have yet to see my luck turning. When will I see something amazing soon?

Hi Ivonne! We can't say for sure, but we'll be hoping that you encounter something amazing soon!

Where in the Brentwood area nellies eggs sold?

Hi Jeannette! We're not sure what state you're in, but we hope you'll take a peek at our egg locator to see what stores have our eggs. They can be found nationwide, so there's a great chance they are near you! https://www.nelliesfreerange.com/where-to-buy-free-range-eggs Please let us know if we can assist further!

Got six in a row from one of your cartons today! It was an awesome surprise. :)

Wow, it seems you certainly got lucky!

Hi, does a double yolk effectively mean that the birds, if left to hatch naturally, would become identical twins? 😆

HI Andy, great question! It is essentially possible for this to happen in a backyard flock, but our eggs are not fertilized, so without that, no egg will hatch into a chick. Thanks for the great question!

We're so glad to have helped provide some information, Amy! Thanks for taking the time to reach out!

Hi Andrew! That's a lot of double yolkers in one carton. Generally we find when we have some younger flocks we'll have a higher percentage of double yolkers. Hopefully you'll see some again soon! Thanks for choosing our eggs.

I have did get several duoble yokes in my dozen of your eggs! I just love Nellies Eggs, and now I know why I am getting double yokes, younger hens! I love you Nellies Eggs!

Hi Bonnie! Thanks for the feedback on the article and for supporting our small family farms!

Hi there! I just cracked open my 9th double yolk in the same Nellie’s dozen! These are not labeled “Jumbo” however, but rather “Extra Large” is this considered the same size category? At any rate, I do have a question about these anomalies that I am surprised no one has asked or acknowledged here yet: can the double yolk eggs be used the same way for baking or would you suggest removing one of the yolks for this? Thank you!

Hi Sarah! It is very possible that we may have had some 'extra' jumbos that we packaged in extra large cartons. If you'd like to send us an email to: [email protected] with the carton use by date information, we'd be more than happy to check! As for baking with double yolkers, really it all comes down to size. If your recipe calls for egg yolks only, you need to pay attention to the yolk size. Sometimes your double yolkers will have half-size yolks, so two would count as one. But if they are full-size, you’d count them as two separate yolks. For full eggs in a recipe, just go by weight. Please don't hesitate to reach out to us if we can assist further!

Double yolks in nature occur at a rate of about 1/1000. Even grouping eggs by size would not account for having up to 50% of a carton as double yolks. Something fishy is going on...

Hi Nick! We actually partner with quite a few family farmers across the U.S. and we have many chickens in each flock. This means we have a plethora of eggs coming to us and once they're sorted in the line into superjumbos, we have quite a few that will all go into the same containers. So although it's statistically low overall to encounter double yolks, we have many Nellie's hens and this can account for multiple double yolks in a carton!

As a loyal consumer and a great lover of Nellie's eggs, we should always have the right to have 2 egg yolks.😂😂😂🤪

You're cracking us up, Loides! Sometimes, it's just the luck of the draw - hopefully you'll get some double yolks soon.

Hello, Very interesting article. I bought your eggs (jumbos) at my supermarket "Stop and Shop" and so far 4 of the eggs in my carton had double yolks. I'm expecting that the rest of the batch in that carton will come this way as well :)

We love to hear this, Naomi! It sounds like you have one lucky streak. We're glad we could provide an explanation for the phenomenon!

Just had 3 double eggs from batch of six. Is that rare. Havnt cracked other 3

Hi there, Adrian. It's actually not that unusual, especially if you've got jumbo eggs. Because the eggs are larger, we need to hand package them together so they do not become crushed. It is likely that these eggs were packaged at the same time. Hope this helps to answer your question!

I just finished a dozen that were all double yokes.

It must be your lucky day, Ken! We hope you enjoyed your extra yolky breakfast.

Well this is my fun fact for the day! My dozen so far is at a 50% rate for double yolks!

Wow! Sounds like you've got a lucky carton, Pamela! 😊

My mother gets these Hugh eggs at the deli , many have double yolks. My sister and I were fearful to eat these eggs because we thought the chickens were being feed hormones. Could that be possible?

Great question, Laura. Our hens are never given hormones, so there's no need to worry when you come across a double yolk. They're typically a result of younger hens simply learning how to lay eggs!

Found my first double yolk today. And yes it was a Nellie’s! Poached and seasoned with fresh dill, twice a yummy 😋

Lucky you, Laurie! It sounds like it made for a delicious meal.

Gee! I thought they were twin chickens! LOL

Hi Debbie! We don't offer fertilized eggs for sale, so one of our eggs would not hatch, but if you had a backyard farm with a rooster it may be possible. We do think it's a fun bonus to receive a double yolk in a carton though.

yes I too experienced one egg that had a double yolk, it was quite a surprise!

You're one lucky duck, Alice!

I have never tried the double yoke eggs but I love to try them.

They're pretty cool, Janice! Consumers tend to find them in our jumbo eggs, so if that size is available where you shop, that's a great place to start.

The hens appreciate your support, Christine!

My last 2 cartons were full of double yolks!

It must be your lucky day, Jaya! We bet that was a pretty exciting experience.

Great little story. I enjoyed it. I've come across a "double yolker" before. Kinda interesting that they are about 1 in 1000. Nellies eggs are great tasting. Better than the others.

We're thrilled to hear that you enjoyed learning about double yolks, Shelley. It's pretty exciting to come across one, and we're glad that you got to have that experience!

I once had 5 double-yolked eggs in one of your cartons. Thought I'd died and gone to heaven, haha.

You're one lucky gal, Sue! We bet those double yolkers were delicious.

Hi, I hope this okay to leave hear. I have purchased your eggs before and still do BUT with one of my purchases, I found one egg that was not only not edible (it was smelly) and the outside of the egg was not clean. Mind you, this is ONE egg out of hundreds purchased. So I am not really complaining just making you aware. And yes, I will continue to purchase your product.

We're so sorry about this spoiled eggs, Marianna. We really appreciate the heads up and would love to collect some information for our quality team and send you a couple of coupons to use toward future purchases. Do you mind sending us an email at [email protected]?